JPA/Hibernate and especially spring-data are incredibly useful for getting ahead without the tedium of coding up persistence. They aren’t to everyone’s taste (some devs hate to lose the explicit data mapping code) but for the right problems, I wouldn’t want to code without them. That said, once you leave the simple examples behind it can get very complex. My most recent struggle was trying to get @OneToOne mappings working with shared primary keys. A few misunderstandings left me chasing my tail for a while. I must have spent a couple of days on this, pecking at it whenever I had time, so I figure it’s worth a write up.

I’m working on a system that authenticates users in multiple ways and I have a specific data model in mind – a User can have optional LocalCredentials and optional ExternalUserDetails (via google, github, etc.). This was originally either-or, but the requirements changed to allow for externally authenticated users to acquire local creds and so gain more permissions. 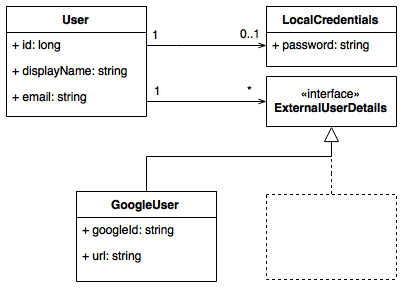 Users have a unique email address, but the PK is a surrogate here to make it work nice with REST. The optional parts share this PK, so although the object model has relationships traversable from the User to the optional objects, the data model relationships are based on the user_id and nothing is added to the user table. In the future, other external auth systems will be added, so this is important.

The working stack is spring boot using spring-data and spring-security with a few goodies like lombok to simplify the code. The main point to note about using spring-data is that we don’t use the DAO pattern to manage tables, we expect to be able to save User entities via a UserRepository and have any related (owned) structures updated/persisted automatically. In a DAO system, with more explicit mapping of the entities, we would always take care to update User entities before persisting LocalCredentials with a copy of the user ID. In the repository pattern, we link the two objects in the normal (Java) way and expect the mapping layer to handle the rest.

To realise the design in code, we make a bidirectional reference between the User and LocalCredentials and maintain the relation in the setter in User (the ‘owner’). The trick to using a shared PK is to add @Id to the target field. Using lombok to simplify, it looks something like this:

This looks like a working object model, but when it comes time to persist – the following sample doesn’t work:

The Problem with Hibernate

This took a stupidly long time to debug. Step debugging through the hibernate code is painful as there is so much indirection (necessarily) and you have to take into account all the proxies, listeners, combinations of possible states, sessions and so on. The symptom presented by the code above is a constraint violation because the local_credentials insert is attempted with a null user_id. It’s fairly obvious that this means the relationship is being ignored or broken. In fact the save operation actually breaks the link in the Java objects! But this is only visible in the LocalCredentials -> User direction, so it’s harder to spot as this direction is rarely used.

Information on the web for this was spotty. There are also numerous ways of linking objects like this, some long deprecated and some very Hibernate-specific. I eventually stumbled on the cause by taking this example code and tweaking it to be more and more like my use case until it failed.

Seasoned Hibernaters may have spotted the issue already, but it all comes down to the use of fields instead of annotated getters. If you de-lombok the entity definition getters (at least, those on @Id fields) and apply the annotations to the getters, all is well.

The Problem with Me

At the point I first discovered this, my reaction was that this must be a bug. There are so many ways to approach Hibernate that it’s possible for edge-cases to get overlooked. But right now, I’m not so sure. By putting relationship-maintaining code in the setter, I’m ensuring that direct field access is not going to work where this relationship is concerned. So using field access was telling hibernate that it can bypass my own constraints.

But on the other hand, I was definitely not expecting Hibernate to be re-constructing the relationship from one side only and I’m still not convinced it should be. (update: this was accepted as a bug HHH-11068)

What I’m left with is the feeling that this sort of experience is one of the main reasons there are so many detractors of ORM libraries. I need to be on my guard that this doesn’t unduly influence me next time I have to pick a persistence stack. It should have some influence, for sure, but developers have a tendency to be once-bitten-twice-shy.

Having said all that though, this seemed like a very straight-forward use case and I’m not keen to go back to churning out boiler-plate for a living. Why can’t the magic just work?